The HayWired Earthquake Scenario: How We Can Outsmart Disaster

By Laurie A. Johnson* 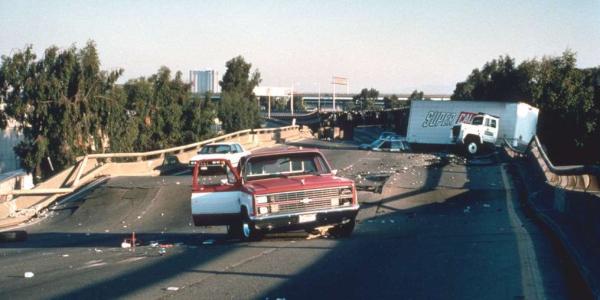 What were you doing at 4:18 p.m. on Wednesday, April 18? Were you starting to wrap up your work day and begin your commute home? Were your kids already home from school or still involved in their after-school activities? How about your spouse, parents, friends and neighbors?

Now imagine what you and your family would do if a major earthquake struck at that same time: 4:18 p.m. on Wednesday, April 18, 2018. That’s the date and time the U.S. Geological Society (USGS) has assigned to a hypothetical magnitude-7.0 earthquake striking on the Hayward Fault, which runs along the western front of the East Bay Hills from Fremont to San Pablo Bay. This hypothetical shock is part of the HayWired earthquake scenario, a major three-volume scientific analysis led by the USGS that anticipates the impacts of a major earthquake occurring along the Hayward Fault. Through scientific modeling of realistic impacts, the project aims to show residents and businesses what is likely to happen after a major earthquake and inspire them to prepare for it. The scenario raises important questions about long-term resiliency that we explored in our Resilient City initiative.

Watch a video simulation of the HayWired Earthquake Scenario:

There is a 72 percent probability of at least one earthquake of magnitude 6.7 or greater striking somewhere in the San Francisco Bay region before 2043. The Hayward Fault is one of seven major active faults traversing the San Francisco Bay Area — and also one with the highest likelihood of generating a major earthquake in the next few decades. The name HayWired speaks to the threat of earthquakes on the Hayward Fault and to the vulnerabilities and strengths posed by the interconnectedness of the Bay Area’s people, utilities, roads and economy — including the digital economy.

In the scenario, the hypothetical earthquake is centered in Oakland and ruptures both northward and southward along the Hayward Fault for about 52 miles. East Bay cities — from Richmond in the north to Fremont in the south — are hardest hit by violent ground shaking that lasts for more than a minute, but strong shaking is felt throughout the region. In the scenario, many aftershocks occur in the minutes to years following the mainshock, including 14 earthquakes of magnitude 5 or larger over a two-year period. The largest hypothetical aftershock is a magnitude 6.4 earthquake that occurs on October 1, 2018, and is centered in Cupertino.

Volume 1 of the HayWired scenario was released last year and details the earthquake science and hazards information of the scenario, including the areas likely to be impacted by liquefaction — when earthquake shaking causes soils to behave like liquid — and the areas at risk of earthquake-generate landslides, especially the East Bay hills.

Volume 2 of the HayWired scenario was released on April 18 and focuses on the immediate impacts to people, buildings and infrastructure, including fires that erupt in the aftermath of such a major earthquake. In the scenario, estimates of casualties include 800 deaths and 18,000 injuries from building and structural damage caused by ground shaking and liquefaction hazards combined. More than 2,500 people in the region could require rescue from collapsed buildings, and more than 22,000 people might need to be rescued from stalled elevators.

Property damage and direct business disruption losses due to ground shaking damage, liquefaction and landslides are estimated to be more than $82 billion (in 2016 dollars). Damage from the mainshock could render older, steel-frame, high-rise office buildings and newer reinforced-concrete residential buildings in downtown Oakland and San Francisco unusable for as long as 10 months.

Potable water systems in most of the region would be affected, but East Bay residents could lose water service for six weeks (some for as long as six months). Not only would normal water service be restricted, but the ability to suppress fires would also be reduced. Damage from the HayWired mainshock could trigger widespread fires that would kill hundreds more people, displace more people from their homes, and cause property losses approaching $30 billion.

The HayWired team is building on the engineering analyses to further explore the societal consequences of the scenario. These studies will be released in Volume 3 in October 2018 — around the 29th anniversary of the magnitude 7.1 Loma Prieta earthquake, the last major earthquake to strike our region. It will look at the impacts on information and communications technology, effects on jobs and the regional economy, and issues for community recovery, including population displacement, social vulnerability, interim housing and financing for long-term recovery planning.

Over 400,000 people — or 150,000 households — could be displaced from their homes and communities due to residential building damage and extended infrastructure outages. Alameda County, which would have the greatest numbers of people at risk of displacement in the scenario, also has some of the highest concentrations of vulnerable populations. With few vacant housing units available, it would be very difficult to provide an adequate supply of interim housing quickly, and many people could be forced to leave their communities or even the region. This is what happened in San Francisco after the 1906 earthquake and New Orleans after Hurricane Katrina.

Insurance would only cover a small portion of the building damage. A study of the financial implications of the HayWired scenario by CoreLogic, also released on April 18, estimates that only 9 percent of the residential building damage and 20 percent of the commercial building damage due to earthquake shaking would be covered by insurance. Even with a federal disaster declaration issued for such a major earthquake, tens of billions of additional dollars would be needed to finance the region’s recovery.

The lack of insurance and other resources would make it difficult for many building owners to repair and replace damaged housing, especially affordable housing. Neighborhood-serving retail districts throughout the East Bay are likely to sustain damage and may lose their customers if housing is so damaged that many must move away. Potentially lengthy restoration times for damaged infrastructure, schools, hospitals and other community-serving facilities would also hamper both local and regional recovery.

Long-term recovery challenges for communities and residents after a catastrophic earthquake like the HayWired scenario would be unprecedented but not insurmountable if we take collective action now to:

The USGS and its partners in the HayWired Coalition and the HayWired Campaign are working to energize residents and businesses to engage in new and ongoing efforts to prepare ourselves and the region for such a future earthquake. The American Red Cross Bay Area has information on how to prepare your family emergency plan. The California Earthquake Authority has information on how to physically and financially protect your home. And, the California Seismic Safety Commission has launched a Resilient Business Challenge, which provides actionable science for making informed decisions and is intended to help people and businesses reduce risk and improve their safety, security and economic well-being before an earthquake. Information about the challenge can be found at the Outsmart Disaster website.

* Laurie A. Johnson, PhD FAICP, is a former member of the SPUR-San Francisco Board of Directors and co-chair of SPUR’s Resilient City initiative. She is a lead author of the HayWired scenario and also serves as the enterprise and strategic risk advisor to the California Earthquake Authority.