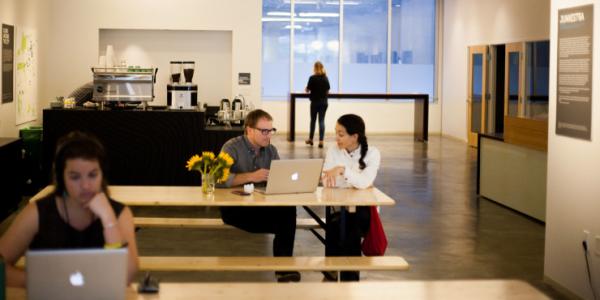 SPUR has long extolled the virtues of a great ground floor. Now we've put those ideas into action with a new ground-floor use at our San Francisco headquarters: a café, Saint Clare Coffee.

Why is an urban planning and policy think tank going into the coffee business? Because we wanted to create an ideal “third place,” right in the heart of downtown. SPUR’s forums bring hundreds of folks to our building each week, and we increasingly saw how lively the interactions before and after those events could be. Now there’s a place to continue the conversation, whether it’s about bus-rapid transit or affordable housing, corporate campus design or café lattes.

Saint Clare Coffee is open from 8 a.m. to 4 p.m. Monday through Friday. In addition to coffee, the café serves tea and pastries. A portion of proceeds will benefit SPUR. We spoke with Saint Clare’s founder, Kevin Bohlin, about the launch of his newest venture.

Tell us a bit about how you got interested in — or obsessed with — coffee.

During college I started drinking coffee for pragmatic reasons, like a lot of us. But eventually I came to really enjoy the ritual of it early before the sun was up, and buying whole beans and grinding my own made me an aficionado at the time among my friends. I didn't know anything about origin or coffee processing, but I cared about freshness and careful, artful preparation.

After having had some formative cross-cultural experiences in coffee-producing countries — and while studying cultural anthropology and working part time as a barista — my imagination started growing into ideas of working in coffee, where my passion for the beverage and its preparation could connect with my passion for cultural diversity and relationships. From there I decided to learn from the ground up as a barista and took advantage of as many learning opportunities and relationships as I could.

You opened your first café, Saint Frank, in 2013. Now you're opening Saint Clare here at SPUR. How did this location and partnership come about?

When we opened Saint Frank, I met architect Amanda Loper, who works with David Baker Associates.  Amanda and DBA are big supporters of SPUR, and since Amanda and I really resonate on significant social and cultural issues, I was interested when she told me SPUR wanted to make the Urban Center more active and engaged with the public. We've received a lot of invitations to open cafés in various spaces, but the prospect of connecting with an organization like SPUR was really interesting to me, and the social drive of SPUR’s desire for a café was a big incentive. As we starting developing the social-entrepreneurial side of the Saint Clare brand, it seemed like a cool fit.

Saint Clare is partnering with Not For Sale, making it a café with a mission. Tell us about it.

We started talking with NFS a number of months ago about how we could work together on their mission to end modern slavery and trafficking. With Saint Clare, we have the opportunity to work with their Reinvent program, training vulnerable and exploited young women to be baristas. We're really excited to be working with them in a very tangible way, as well as providing financial support to NFS. We’re also working in places like Thailand to source coffee, with the goal of driving an economic alternative to slavery for families in extremely difficult situations. There are a lot of layers to this, but what’s really exciting is that it’s a quality-driven service that serves good coffee and is also doing good.

You've described the coffee at Saint Clare as more "accessible" than Saint Frank's coffee. What does that mean?

Saint Frank coffees are really beautiful, but for a lot of people the roast is really light and the body is thin. Also, many times our coffees are extremely limited; you might not have long to enjoy a coffee before it’s gone for the season. Even though we’re nicer than just about any coffee business, it can sometimes seem intimidating. Saint Clare will have similar — and in some cases the same — coffees as Saint Frank, but we'll roast and serve them in a way that fits a wider array of palates and interests: slightly darker roasts, and some fun sweeter drinks, like our take on Thai Iced Coffee.

Okay, I'll admit to being a fan of darker roasts. Am I a philistine?

Absolutely not! It’s a preference of taste that is quite prevalent, especially here in the Bay Area where Peet's predates the Starbucks phenomenon. Let's compare this to wine. The leading preference for wines from California and the New World is for riper, sweeter wines with a decent dose of American Oak and more alcohol. European wines can have more acidity and less alcohol, but more nuance. They also tend to favor expressing terroir — the place where the grapes are grown — over the hand of the winemaker. Darker roasts in coffee are like that New World preference in wine, while lighter roasts are like Old World wine. One isn't necessarily superior to the other, but when you’re working with special places and producers, it can be really lovely to let those things be expressed. Saint Clare is shooting for a middle ground: slightly darker roasts with a bit less acidity but still enough to let the terroir and region shine through.