Healthy food incentive programs — which provide low-income families with matching dollars to buy fruits and vegetables — have been gaining traction in policy circles recently. Just in the past couple of months, the federal government granted millions of dollars to projects nationwide and the New York Times reported on programs in a few states.

Why the increased attention? Because these programs work. An in-depth evaluation of an incentive pilot program in Massachusetts funded by the US Department of Agriculture found that individuals who received incentives ate 25 percent more fruits and vegetables compared to those who didn’t receive the incentives. And, another evaluation found that a majority of local farmers at farmers’ markets nationwide participating in an incentive program reported increased sales because of incentive programs.

California’s largest healthy food incentive program is known as Market Match. Since 2010, this statewide program, which is coordinated by the Ecology Center of Berkeley, has expanded from 44 farmers’ markets to 234 farmers’ markets and farm-direct retail outlets.

Market Match and similar programs nationally, however, are constrained by two factors. The first constraint is stable funding. Currently, healthy food incentive programs are funded by a mix of public and private grants. Grant funding has allowed the programs to get started, expand and experiment. But, by their one-off nature, grants do not provide a long-term stable base for programs that require renewed funding annually. The second constraint is one of scale. If healthy food incentive programs are to have a large impact on food insecurity and public health by helping millions of Californians afford more produce, they need to be available where most low-income Californians do their shopping: at supermarkets and grocery stores.

Data from the CalFresh program, which is the state’s federally-funded food assistance program (known nationally as SNAP and formerly as food stamps), demonstrates the importance of grocery stores as a retail outlet for low-income families. According to the California Department of Social Services, families participating in CalFresh spent 89 percent of their benefits at supermarkets and grocery stores in 2014. This includes big-box stores such as Wal-Mart and Costco, supermarkets like Safeway and Lucky, and smaller independently owned grocery stores in communities statewide. In contrast, families spent 0.05 percent of their benefit dollars at farmers’ markets in 2014. On one hand, this is a sign of progress. California families spent twice as much of their SNAP benefits at farmers’ markets than the national average, and spent 80 percent more of their benefits at famers' markets in 2014 compared to 2011. On the other hand, farmers’ markets, for all their growth and success, still only capture $3.5 million in CalFresh spending each year compared to the $6.5 billion captured by supermarkets and grocery stores. A healthy food incentive program will reach exponentially more people if it is available at grocery stores in addition to farmers’ markets. 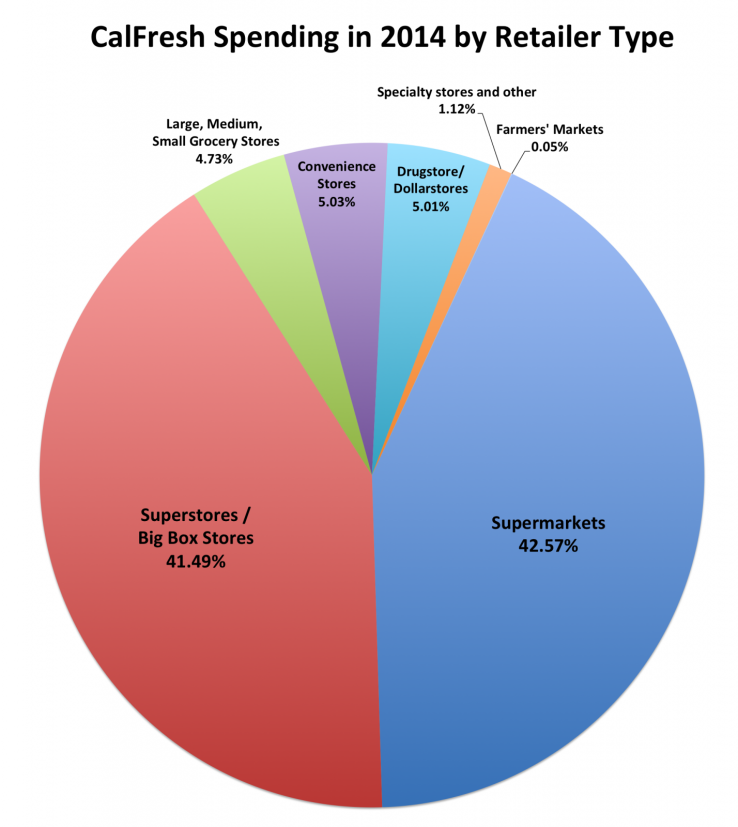 Families spend the vast majority of their CalFresh benefits at superstores, supermarkets, and grocery stores. Farmers’ markets, for all their growth and success, still only capture $3.5 million in CalFresh spending each year compared to the $6.5 billion captured by supermarkets and grocery stores. Source: CalFresh Benefits Redemption by Retailer for 2014 Calendar Year, California Department of Social Services, SPUR analysis

At the start of 2015, SPUR commissioned a team of graduate students at the UC Berkeley Goldman School of Public Policy to look at these constraints and answer the question: What would it take to broaden the reach and financial sustainability of the Market Match program? [1]

The answer largely comes down to funding. The research team's estimates for the costs of incentives, start-up, and ongoing administrative costs are summarized in the table below and explored in-depth in their report.

Because an expansion to all farmers’ markets would cost less than $10 million annually, it is possible that with enough political support, stable funding could be achieved through appropriations from California’s general fund budget. A coalition of organizations recently succeeded in securing $2.5 million for healthy food incentive programs in the California legislature’s final budget, only to see the funding cut in final negotiations with Governor Brown. Looking ahead, if funding is limited, it would make sense to focus first on expanding healthy food incentive programs at farmers’ markets, where the program has the double benefit of supporting both low-income families and small-scale farmers.

The exponentially larger cost of an expansion to all grocery stores, however, would require a new dedicated revenue source. One option the research team explored is to use revenue from a statewide sugar-sweetened beverage tax. The Rudd Center at the University of Connecticut estimates that a penny-per-ounce tax in California would generate $1.1 billion in revenue. These taxes are gaining in popular support, especially if the revenue is designated for nutrition and exercise programs. Another option is to mix revenue from a new statewide fee on grocery stores with potential matching funding from the federal government. The grocery store fee idea is based on the California Hospital Fee Program model, in which hospitals supported taxing themselves. The local funding generated from the fee would be matched by federal funds, and the additional revenue grocers would receive from increased sales of healthy food would exceed the fee. These types of revenue measures would take significant political support and would likely require multiple years of work to pass.

In the coming months, SPUR will be working with partners to further explore the potential of piloting healthy food incentives at grocery stores in California. There are still many questions of program design, administration and future funding models to sort out. But, given the potential of these programs to scale quickly and have a tremendous impact on improving the affordability of fruits and vegetables, a grocery store pilot will be an important next step in advancing healthy food incentives in California.

Download the UC Berkeley Goldman School team’s report >>
Note: SPUR commissioned this analysis, but the conclusions from the report are those of the research team and do not necessarily reflect SPUR’s official position, which is currently in development.

[1] The topic of healthy food incentive programs is broad and to make the project manageable, SPUR and the research team limited the scope of the research to looking at how to expand Market Match’s reach in terms of increasing the affordability of healthy food. The Market Match program’s goals also include increasing revenue for small and mid-scale farmers and we believe that this important aspect of the program deserves further research. The research teams’ report, though, does not delve into the questions of how Market Match currently benefits small and mid-scale farmers, nor estimate the impact on agricultural producers of an expanded program.