By Jennifer Warburg and Benjamin Grant 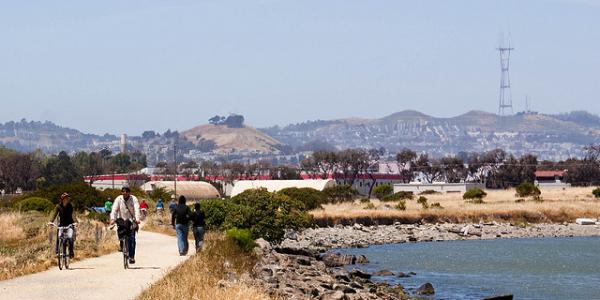 Once the site of a power station, Heron Head park is an example of the kind of restored wetlands, open space and public trail that could run the length of San Francisco's southeast waterfront if the Blue Greenway is completed. Photo courtesy of the San Francisco Bicycle Coalition

If you’ve been involved in parks or planning in San Francisco within the last 10 years, you’ve heard about the Blue Greenway project. This vision for the city’s southeastern waterfront proposes a 13-mile continuous open space, bike, pedestrian and waterway network stretching from AT&T Park in the north to Yosemite Slough in the south. The Blue Greenway would complete San Francisco’s portions of the Bay Trail, reunite the southeastern neighborhoods with their waterfront and create a premiere open space network in an underserved — and growing — part of the city.

It’s a vision that has existed for over a decade and that has enormous support from community members, city leaders and property owners. But the Blue Greenway has yet to overcome some hurdles in the path to realization. Most challenging is the geography of the project, which encompasses dozens of sites owned, managed and monitored by different institutions, under many overlapping jurisdictions.

To address these complications head on, the San Francisco Parks Alliance, SPUR and other partners have kicked off the Blue Greenway Action Plan. This interagency effort will work with landowners like the Port of San Francisco, the San Francisco Recreation and Parks Department, private developers and utility operators to assess the status of the numerous open spaces that are part of the decade-old effort. The plan will identify what actions will best support each element of the project, from environmental remediation to regulatory processes, design, funding and long-term stewardship. 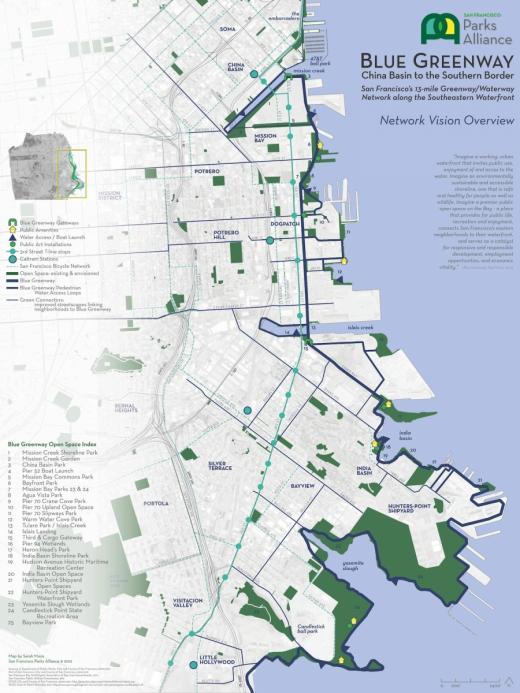 The effort is modeled in some respects after SPUR’s Ocean Beach Master Plan process. Over the past five years, SPUR has shepherded an interagency master planning effort to address sea level rise, protect infrastructure, restore coastal ecosystems and improve public access on San Francisco’s western shoreline. The success of the Ocean Beach Master Plan has been in its coordination of many stakeholders, agency jurisdictions, technical experts and the public to move from idea to implementation. SPUR has played a central role as holder of the vision and manager of hundreds of moving parts over the long term.

Advancing a waterfront vision on the southeastern side of the city presents some familiar challenges and some new ones. While the western side of the city is characterized by the impact of natural elements, the southeastern side struggles more with the legacy of an industrial heritage: polluted land, restricted public access and few existing recreational amenities. The eastern neighborhoods are slated to receive a tremendous amount of growth in the coming decades, including 30,000 new residents over the next 20 years. One of the opportunities of the Blue Greenway is to tie new development in this part of the city together.

In our work to move the Blue Greenway vision to realization, SPUR and the Parks Alliance are standing on the shoulders of many leaders — in particular the 16 public agencies and more than 30 organizations and community groups who came together in 2003 to develop the original vision and roadmap for the Blue Greenway. The Blue Greenway Task Force’s vision for a working urban waterfront that invites public use, enjoyment and access to the bay still resonates.

Now it is the task of the Blue Greenway Action Plan to carry this vision into implementation. How do we accelerate delivery and navigate the interagency jigsaw puzzle to get things done on the ground? Some promising signs of progress have already emerged: The Blue Greenway project has secured $38 million so far in bond funds for build out. Several kick-off events will draw further energy to the project: The Greater and Greener Conference in SF will feature a Blue Greenway boat tour on April 13, and on May 1, SPUR will host a Blue Greenway bike tour. Stay tuned for more details as the project progresses.