Sand Placement Provides a Buffer Against “Storm of the Decade” 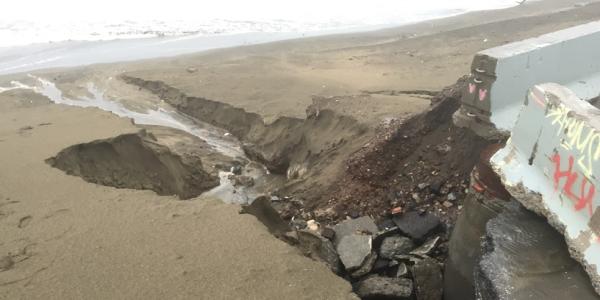 December’s drenching rain and big swells were the biggest thing to hit Ocean Beach for years. Fortunately, sand placement was already in process, providing a ‘sacrificial’ (i.e. temporary) buffer in the locations most vulnerable to erosion. About 25,000 cubic yards were placed this year, following on the success of similar efforts in 2012. One source of erosion that was in evidence: stormwater runoff, which isn’t properly drained at the bluff’s eroding edge, cutting through placed sand and bluff material. This will be an important design factor in the managed retreat process.

The sand placement, performed by the San Francisco Public Utilities Commission in partnership with the National Park Service, is part of an approach to coastal erosion that emphasizes softer, reversible measures while long-term plans in the Ocean Beach Master Plan go through detailed engineering and regulatory review. A stormy start to the winter has been followed by a dry period, and the prospect of an El Niño pattern that could bring significantly more erosive storms remains uncertain.