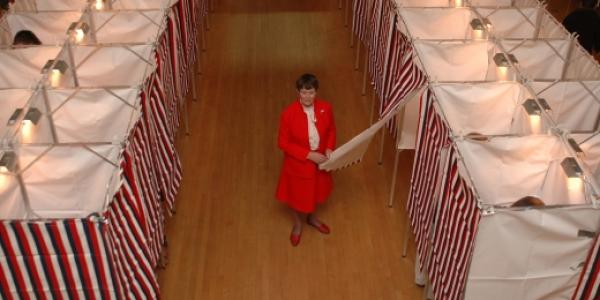 Welcome to election season! Here's a quick overview of SPUR's positions on San Francisco ballot measures. To read our complete research and analysis, check out the full SPUR Voter Guide >>

Like the Voter Guide? Support our work. Join SPUR today >>

Authorizes $500 million in bonds to fund transportation projects.
San Francisco’s streets and transit systems are facing a make-or-break moment. This bond would fund improvements including new traffic signals, safer crosswalks, bus-only lanes, accessible Muni and BART platforms, bike lanes and upgrades to Muni maintenance facilities. A failure to address these needs will result in more hardship for everyone who travels through San Francisco. The city has done the hard work to gather stakeholders, assess needs and come up with a plan for where to invest transportation dollars. While inadequate compared to the scale of need, this proposed transportation funding is a solid start. SPUR recommends a YES vote on Prop. A.
Read SPUR’s full analysis of Prop. A >>

Increases the funding set-aside for Muni in step with a percentage increase in population.
SPUR agrees that new, reliable funding sources for Muni are necessary, particularly for operating costs. However, this proposed increase to the city’s general fund set-aside for Muni does not conform to any of SPUR’s recommendations for how to structure set-asides. It is not tied to available revenue, it is not funded by a new revenue source, it does not expire and it is not connected to a measurable outcome. We struggled with this measure, because we support its goals, but due to our concerns with the way this set-aside is structured, we do not recommend it as part of the solution. SPUR recommends a NO vote on Prop. B.
Read SPUR’s full analysis of Prop. B >>

Renews and increases the Childrens’ Fund, extends the Public Education Enrichment Fund and changes the school district’s access to funding from the city’s Rainy Day Reserve.
Prop. C would reauthorize critical funds for programs and schools that currently support more than 56,000 children a year. It also extends eligibility for services to both younger children and older youth, and would especially support preschool enrollment for low-income families. Eliminating the sources of funding for existing services would suddenly diminish quality of life for many children and their families. Children can’t vote, and the programs and institutions that serve them deserve public funding and support. SPUR recommends a YES vote on Prop. C.
Read SPUR’s full analysis of Prop. C >>

Allows former employees of the San Francisco Redevelopment Agency to count time spent working there toward their eligibility for City of San Francisco retiree health benefits.
After the state-run redevelopment agency closed in 2012, a handful of employees transitioned into jobs with the city to carry out ongoing projects. Unfortunately, their retirement health care benefits did not transition with them. They lost credit for their service and had to start at year one, even if they were nearing retirement age. Because eligibility for these benefits is defined in the City Charter, taking it to the ballot is the only way to modify it. While a small issue and a minor expense for the city as a whole, this is a matter of enormous consequence for the affected employees and their families, and voters have the power to set it right. SPUR recommends a YES vote on Prop. D.
Read SPUR’s full analysis of Prop. D >>

Levies a tax of two cents per ounce on soda and other sugar-sweetened drinks, generating approximately $31 million to $54 million annually for school food, active recreation programs and other health-related initiatives.
This tax on sugar-sweetened drinks would reduce consumption of beverages that are closely linked with the costly public health crises of obesity, diabetes and diet-related disease. Education campaigns are important, and will be funded by this initiative, but they have proven insufficient in addressing these public health problems. The revenue is progressively targeted to serve communities that are disproportionately affected by diet-related disease. Given the severity of our public health problems, this measure deserves support. SPUR Recommends a YES vote on Prop. E.
Read SPUR’s full analysis of Prop. E >>

The SPUR Voter Guide, Made Possible by Our Members

Approves a change in building height limits for a portion of Pier 70 in order to build a mixed-use development.
This measure proposes building parks, housing, cultural space and jobs on a 28-acre portion of the currently vacant Pier 70. It would add 1,000 to 2,000 units of housing, 30 percent of which will be affordable, and would open up this part of the waterfront to public access. The project sponsor has carefully considered the mix of uses for this special site and has engaged extensively with the community to decide what should go here. The plan’s focus on restoring historic buildings for cultural uses is not only appropriate for this area of the city but also thoughtful and creative. SPUR recommends a YES vote on Prop. F.
Read SPUR’s full analysis of Prop. F >>

Adds a new surtax on residential properties with two to 30 units that sell less than five years after their previous sale date.
This measure attempts to address the recent rise in Ellis Act evictions, which allow owners of rent-controlled buildings to evict tenants and convert the property into ownership units. Properties sold within five years of their last sale would face a steep tax, reducing the financial incentive to “flip” buildings for sale. Unfortunately, Prop. G may end up affecting many people who have a legitimate need to sell their property within five years. In addition, it is unclear whether the measure will lead to a reduction in real estate speculation and Ellis Act evictions. Weighing these considerations, we were unable to support either position on this measure. SPUR has no recommended position on Prop. G.
Read SPUR’s full analysis of Prop. G >>

Requires that all athletic fields in Golden Gate Park west of Crossover Drive be maintained as natural turf, without nighttime sports field lighting.
Prop. H would halt the renovation of the Beach Chalet Athletic Fields in Golden Gate Park out of concern about the potential environmental impacts of synthetic turf and nighttime lighting. The rennovation would add playing fields and allow kids to use the fields many more hours each year. Opponents of the renovation have spent six years taking their concerns to multiple city and state regulating bodies, all of whom ultimately approved the project. By resorting to a ballot initiative after losing at every stage, the measure’s proponents are undercutting the ability of the existing planning and regulatory process to settle controversial issues fairly. San Franciscans badly need recreational facilities, and the Beach Chalet Athletic Fields renovation should be allowed to move forward. SPUR recommends a NO vote on Prop. H.
Read SPUR’s full analysis of Prop. H >>

Raises the minimum wage in San Francisco to $15 by July 1, 2018.
Raising the minimum wage would put needed money into households struggling with the high cost of living in the Bay Area. It would also lead to more local spending. We recognize that higher wages impact some employers and would increase costs for the City and County of San Francisco. But we believe there is a greater moral principle at stake than simply balancing economic impacts: Those at the bottom of the economic ladder should not have to struggle so hard to make ends meet in San Francisco. Prop. J is an appropriate and necessary local response to improving economic security for tens of thousands of households. SPUR recommends a YES vote on Prop. J.
Read SPUR’s full analysis of Prop. J >>

The SPUR Voter Guide, Made Possible by Our Members

Affirms the city’s commitment to addressing the current housing affordability crisis.
This nonbinding policy declaration would reiterate the mayor’s stated goal of building or rehabilitating 30,000 homes by 2020 and set affordability goals for those units. Prop. K unites two competing initiatives originally proposed by Supervisor Jane Kim and Mayor Ed Lee. While SPUR does not favor using the ballot initiative process for non-binding policy statements, we generally support the measure’s goals, especially its call for increased funding for affordable housing. And we’re pleased Supervisor Kim and Mayor Lee reached an agreement. By encouraging all parties that care about housing affordability to work together, we have a much better chance of addressing the current crisis. SPUR recommends a YES vote on Prop. K.
Read SPUR’s full analysis of Prop. K >>

Directs the city to alter existing transportation programs and pursue policy priorities that benefit motorists.
Prop. L calls on the city to give automobile drivers greater priority in transportation policy. This would compromise many of San Francisco's groundbreaking sustainable transportation policies, which have prioritized space for transit, walking and cycling on our public streets. San Francisco needs to continue, not undo, these gains. Prop. L would increase driving and leave us jammed in a system that doesn’t work well for anyone, where masses of motorists create conflicts for walkers, bikers, transit vehicles and each other. Rather than reversing course, we should be designing the urban transportation system of the 21st century. SPUR recommends a NO vote on Prop. L.
Read SPUR’s full analysis of Prop. L >>