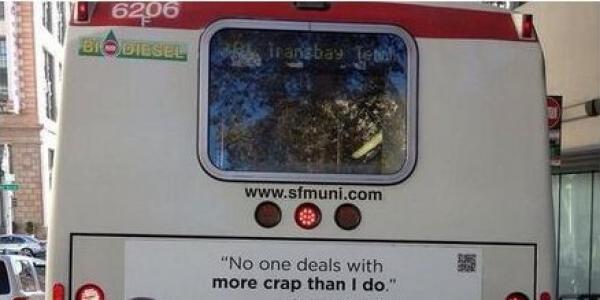 When you  think of a city’s circulation system, you might marvel at its network of streets, rail tracks and public transportation but another essential system lies underground – largely hidden and unremarked. The city’s network of storm drains, culverts and sewer pipes is essential to public health and environmental quality. Recently these two worlds collided when the Muni buses and trains became vehicles for San Francisco’s Public Utilities Commission advertisements, giving this hardworking system some well-deserved visibility around the city. This creative ad campaign certainly made me curious about how San Francisco’s wastewater system functions, and soon afterwards I found myself taking a tour of one of its vital components: the Oceanside Water Pollution Control Plant. It was a fascinating experience shedding light on the inner workings of this impressive facility that provides an incredibly valuable service to the city’s residents while preserving the ocean’s water quality.

San Francisco is served by three wastewater treatment facilities: North Point near Fisherman’s Wharf, Southeast Wastewater Treatment Plant in Bayview Hunter’s Point and Oceanside Water Pollution Control Plant near Ocean Beach. Oceanside is the newest facility of the three, built in 1993 as a result of the Federal Clean Water Act upgrade. It replaced the old Richmond Sunset Water Pollution Control Plant from 1935 that was situated in Golden Gate Park. Adjacent to the San Francisco Zoo, this modern plant is engineered for a future Zoo expansion over its roof, able to withstand 300 pounds per square foot as a future Mammal Center. The plant’s facilities are designed to be largely out of sight from the adjacent recreational areas with 70% of its 12 acres located underground, mainly for odor and noise purposes. Its state of the art HVAC system and sophisticated odor control units limit impacts on nearby neighborhoods. 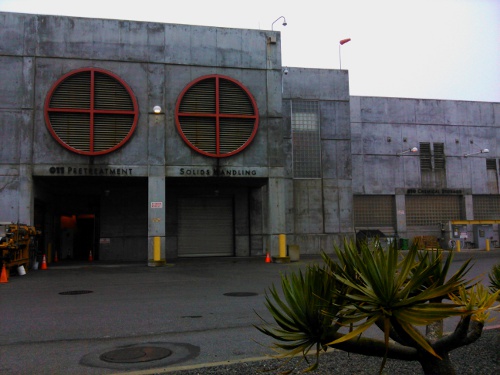 The Oceanside Treatment Plant is specially engineered for coming earthqaukes as well as a future Zoo expansion over its roof. Image by Maria Bakali.

How the system works

San Francisco is the only major city on the California coast with a city-wide combined sewer system. The wastewater load fluctuates depending on weather conditions. In dry weather sewage travels through a network of pipes to the Westside Transport Box, a rectangular tube under the Great Highway between Lincoln and Sloat Boulevards. From there it flows to the Westside pump station at Sloat Boulevard, where it is pumped to the Oceanside Water Pollution Control Plant for treatment. The secondary-treated effluent is discharged 4.5 miles out to the ocean through the 80 feet deep Southwest Ocean Outfall. When the plant’s capacity is overwhelmed in extreme wet weather conditions, the transport box and the Lake Merced Tunnel fill up and retain the combined flow. Overflow there is decanted through a second chamber in the Westside Transport box and a second set of pumps transport the decanted flow to the deep ocean outfall. Only when that system’s capacity is exceeded do combined discharges occur, through seven outfall structures, three on Ocean Beach, one at Mile Rock and three near the northern beaches of China and Baker beaches.
​ 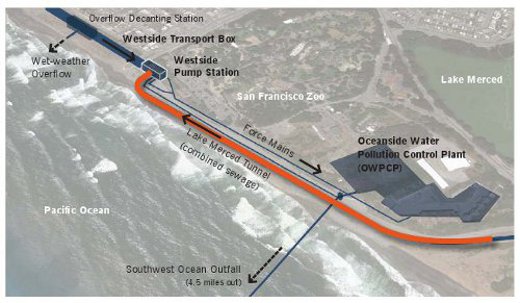 The 200 tons of biosolids produced daily as remainders of wastewater’s secondary treatment are regionally transported for agricultural land application purposes or for landfill beneficial reuse. In addition the methane produced in the plant’s digesters is used to power the plant, covering 30% of its electrical needs. Most of the system’s functions are automated (60%), with the plant’s engineers, chemists and marine biologists monitoring the plant’s good operation and the quality of the ocean’s environment and ecosystems respectively.

Why is this facility important

The Oceanside Water Pollution Control Plant is a very efficient system, serving the city’s Westside neighborhoods and watersheds while treating 20% of the city’s average annual wastewater flows. It is an award winning facility whose prizes include the 2003 Large Plant of the Year Award and the 2004 US Environmental Protection Agency National Clean Water Act Recognition Award for Operations and Maintenance Excellence. This expensive piece of infrastructure is at the early stages of its operating cycle and maintaining its good performance and operation for the rest of this cycle is vital.

Current Challenges
There are, however, some significant challenges in doing so. The main threat to the facility is coastal erosion that could damage the Lake Merced Tunel underneath the Great Highway. With the sea level rise posing an imminent hazard, future erosion issues most likely will worsen if no comprehensive coastal management is set in place. Another question is how the current infrastructure can deal with the future combined sewer loads. To relieve some stress put on the system during extreme weather events, Public Utilities Commission (PUC) is moving forward with projects that combine grey and green infrastructure and integrate innovative stormwater management solutions of Low Impact Development (LID). 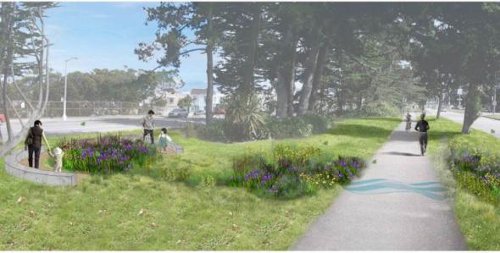 New green infrastructure projects like the one on Sunset Boulevard will provide stormwater control while upgrading neighborhood living conditions. Image courtesy of SFPUC.

One of the major goals of the Ocean Beach Master Plan is to protect in place the Oceanside system components for the next decades. According to the OBMP vision a combination of managed retreat, beach nourishment and low profile structural protection will substitute current revetments providing a more environmentally sensitive and aesthetically preferable solution. These measures will also allow for improved recreational and ecological opportunities along the beach and the surrounding area, benefiting residents and visitors alike. The PUC is working very closely with SPUR, the coastal engineering team and other partner agencies on developing a Coastal Management Framework, that will delineate coastal protection strategies until 2050. For more updates on developments on Ocean Beach join SPUR’s new public outreach efforts this May. Stay connected with us through Twitter, Facebook and our Blog!

Want to know more about the Oceanside Treatment Plant? Sign up for a free tour organized by San Francisco Public Utilities Commission.