Ending Hunger in San Francisco by 2020

By Molly Schmidt and Eli Zigas 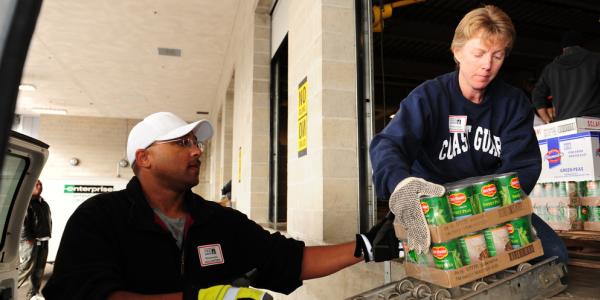 While San Francisco is a city that celebrates food, it's also home to many people who struggle to get three complete meals a day. According to two recently released reports, Assessment on Food Security in San Francisco and A Changing Landscape: Food Security and Services in San Francisco’s Tenderloin, between 100,000 and 225,000 residents have incomes that put them at risk of food insecurity – the inability to feed themselves with adequate nutrition without the assistance of emergency food programs. Taken together, the reports show that even with strong collaboration among government agencies, nonprofits providers and the private sector, there are still many hurdles to overcome in addressing food insecurity in the city.

One primary hurdle is access to federal food assistance dollars, which is affected by an income measurement known as the federal poverty level. This guideline — used to calculate a number of food assistance benefits such as the Supplemental Nutrition Assistance Program (SNAP, known as CalFresh within California) the Special Supplemental Nutrition Program for Women, Infants and Children (WIC), and the National School Lunch Program (NSLP) — is standardized across the country and does not reflect local differences in the cost of living. According to 2013 guidelines, a parent with two children living in San Francisco will not qualify for federal nutrition programs like food stamps and school lunches if they earn more than $19,530 annually. However, the California Budget Project estimates that it costs $96,347 annually for a parent with two children in San Francisco to cover basic expenses. Adjusting the federal poverty level to reflect the local cost of living would allow more residents to access federally funded food assistance programs. While this would benefit hungry San Franciscans directly, it's also an opportunity to boost our local economy; in 2010 the USDA estimated that every $5 in new SNAP benefits generates as much as $9 of economic activity.

Another major hurdle identified by these reports is providing for the 45,223 low-income seniors and disabled adults in San Francisco who receive Supplementary Security Income (SSI) through Social Security. In California, these residents receive about $1,000 per month but are not eligible for CalFresh and therefore don't have access to a primary source of food assistance.

Locally, even though nonprofits like the SF-Marin Food Bank, Glide, St. Anthony’s and Meals on Wheels are providing more meals than ever, they cannot keep up with demand and are increasingly dependent on private donors, which is an increasingly precarious funding model. Another notable issue is that more than 19,000 housing units in San Francisco lack complete kitchens. Even if families living in these units have access to food, they don’t have the ability to store and prepare meals. They must rely on prepared foods from retailers or restaurants or meals prepared by a charitable organization.

Fundamentally, the bulk of food insecurity in San Francisco is caused by insufficient income. Long-term, supporting affordable housing, job creation and living wages would all help reduce the number of people facing food insecurity. In the meantime, the reports have some immediate recommendations for policymakers, including:

On December 10, 2013, soon after the reports were released, the San Francisco Board of Supervisors unanimously approved a resolution introduced by Supervisor Eric Mar to take concrete steps in ending food insecurity and hunger in the City by 2020. Another hearing in March 2014 will highlight some of the progress made on these resolutions.

Food insecurity doesn't have a simple solution. The Board of Supervisors has called on many agencies to publish reports detailing exactly how much money and services they will need in order to meet the goals of the resolution. Through continued collaboration, innovation and sharing of resources between community-based organizations and city agencies, San Francisco is aiming to be the first city in the country to realize the dream of food security and zero hunger for its residents.