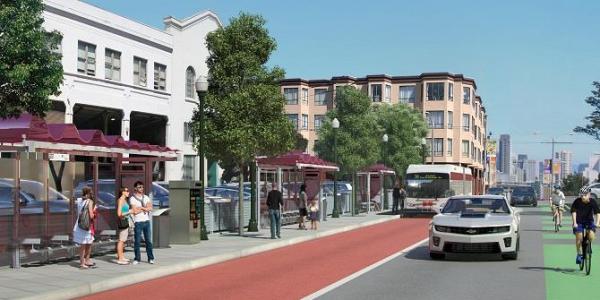 Renewed momentum on the Geary BRT project resulted in a new design that mitigates some of the previous design controversy. Rendering courtesy Go Geary

Stalled for years in environmental review and public uncertainty, the project to build bus rapid transit on Geary Boulevard is gaining momentum, with new designs and a new target opening date.

Bus rapid transit, or BRT, could provide a 30 percent decrease in travel times while providing a smoother ride. Modeled to resemble the comforts of rail transit, BRT provides many of the same benefits of light rail but at one-tenth of the cost. Features include dedicated traffic lanes, large waiting platforms and stations, prepaid boarding and modern vehicles.

Voters mandated BRT on Geary with the passage of the Proposition K sales tax in 2003. The project is managed by the San Francisco County Transportation Authority under the guidance of a Citizens’ Advisory Committee.

The improvements are much needed. The 38-Geary is the most used bus route west of the Mississippi, with more than 55,000 riders a day. The entire transit corridor, which includes the 2-Clement and the 31-Balboa, carries around 80,000 riders a day. If each of those riders saved an average of 10 minutes of transit time a day, they would save a combined total of 4 million minutes every week.

In part the renewed momentum is the result of a new design alternative, called 3-Consolidated, or 3C. This design would meld local and limited services into one highly frequent service with short waits between buses and high travel speeds. Not only does 3C provide more rapid service to more riders, but the plan negates much of the parking loss that made previous plans so contentious.

Supervisor Eric Mar, who represents the Richmond District and the bulk of Geary’s ridership base, has been working with the SFCTA to speed up the project’s completion date, from 2020 to 2018. This would coincide with the opening of Van Ness BRT, which was recently approved by the boards of both the SFCTA and the Municipal Transportation Agency .

To find out more about the Geary BRT project, show support and get involved, please visit GoGeary.org or facebook.com/GoGeary.