What Bay Area Bike Share Will Need to Succeed 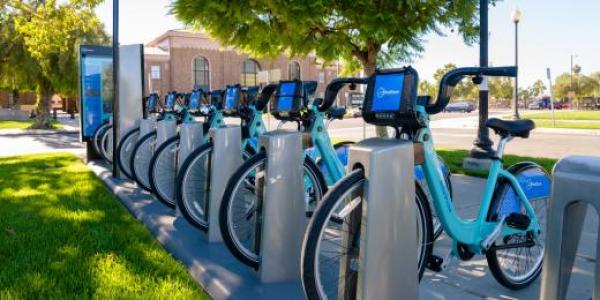 Since rolling out on August 29, Bay Area Bike Share has logged an estimated 21,138 bicycle trips and gained 2,273 annual members and 4,380 casual members. Not bad for a pilot program with only 700 bikes at 70 locations.

But for Bay Area Bike Share to last —and grow — it’s important to ask how we can translate this initial success into a long-term one. Launched simultaneously in five cities— San Jose, Mountain View, Palo Alto, Redwood City and San Francisco — the program is the first multi-city bike share program in the country. The future of the program faces two immediate issues: how to fund it and how to make it work at its unique regional scale.

On the funding front, corporate sponsors have proven a successful model in many cities. New York City partnered with Citi Bank to create CitiBikes, of which there are 6,000 on the road. Boston has teamed with New Balance and has 2,215 bikes running. London, sponsored by Barclays, has around 8,000 bikes on the street. And Paris works with SJDecaux, the largest outdoor advertising corporation in the world, and runs about 20,000 bikes.

These examples show that even regions as affluent as ours need financial support in order for their bike-sharing programs to thrive. As federal transportation dollars dwindle, public-private partnerships are a compelling solution to funding infrastructure investments. One of the Bay Area’s most valuable assets is the number of successful companies that call it home. Why not Google Bikes or Twitter-Cycles? Maximizing these resources could give the region a major funding source to expand the program.

On the scale/geography front, the question is how to grow. Observers have noted that the program, which launched with relatively few bikes and stations, will need to expand in order to be a success. The program plans to add 300 more bikes by early 2014; San Jose will grow from 140 to 210 bikes, and San Francisco will grow from 350 to 500 bikes. Bay Area Bike Share estimates an eventual target of between 6,000 and 10,000 bikes throughout the region. But should it grow by adding more stations in existing locations or by expanding to new cities? Should the program prove itself in SF and the peninsula first, or would it be more likely to succeed if it quickly expanded to include the East Bay?

As a regional organization with locations in San Francisco and San Jose, we’ve already seen first-hand the benefit of this system for traveling between our offices: Bay Area Bike Share handily closes the “last mile” gap on either end of the Caltrain ride between the two cities. The last mile challenge exists all over our region, and bike sharing is one of few tools we’ve seen that successfully solves it. We believe Bay Area Bike Share is worth investing in, and worth getting right.