This month the San Francisco County Transportation Authority (SFCTA) and San Francisco Municipal Transportation Agency (SFMTA) unanimously approved the final environmental impact statement/environmental impact report (EIS/EIR) for the Van Ness Avenue Bus Rapid Transit (BRT) Project. When finished in the spring of 2018, the BRT line will serve the two miles on Van Ness Avenue from Lombard Street to Mission Street. The idea behind bus rapid transit is to infuse bus service with the high quality and reliable attributes of rail while retaining the flexibility and lower capital costs of bus service.

The Institute for Transportation and Development Policy emphasizes segregated transit-only lanes and frequent operation as key defining features of BRT service. While other BRT projects have struggled to retain some of these important aspects, the Van Ness project meets the standards for true BRT service. Its approved design, known as the Locally Preferred Alternative, runs in dedicated transit-only center lanes (next to the median) and limits other vehicles from making left turns (except on Broadway and Lombard streets) to improve bus speeds. The design allows passenger boarding on the right side of the vehicle to enable the use of standard buses, which will save on costs. All Muni bus stops corresponding with BRT stops will be replaced by BRT style stations; the remaining Muni stops along the planned BRT alignment will be eliminated. There are nine northbound and nine southbound BRT station locations, with approximately one stop every three blocks. 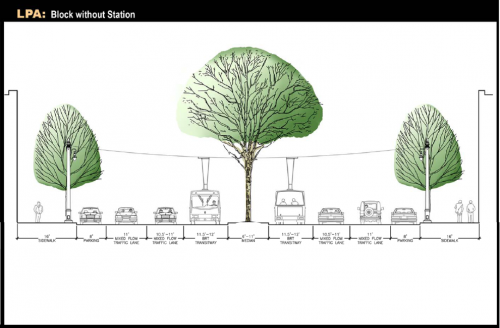 A cross section of the design for the Van Ness BRT project shows how the central transit-only lanes will operate on blocks that do not have BRT stations. Source: SFCTA, Van Ness BRT EIS/EIR 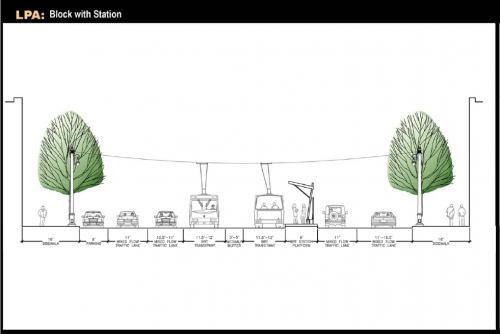 This cross-section shows a street block with a station platform. Passengers will board buses through right-side doors.  Source: SFCTA, Van Ness BRT EIS/EIR

The Final EIS/EIR for the Van Ness Avenue BRT report analyzes the Locally Preferred Alternative – selected last year based on public, agency and stakeholder input – for its potential environmental impacts and identifies mitigation measures. The approval of these environmental documents is critical in propelling the project toward reality by meeting requirements under the California Environmental Quality Act and the National Environmental Policy Act.

Implementing BRT in San Francisco is part of a larger strategy to rejuvenate transit experience along key transit corridors through increased speed, reliability and service. Van Ness Avenue is a major channel for north-south movement within the city and provides connection to 32 other Muni routes. The corridor has the highest population density of all transit corridors in the city and is project to experience a 50 percent growth in jobs, according to the EIS/EIR documents. Approximately 67 percent of vehicular traffic on Van Ness Avenue is local, 20 percent of the local trips on the corridor are made on transit, and a remarkable 46 percent of households on Van Ness Avenue do not own cars. These attributes signify the potential for bus-rapid transit success on the corridor.

Founded on principles that enhance reliability, traveler experience and time efficiency, the Van Ness BRT will close the gap between the demand for fast, dependable transit and the often-sluggish present-day bus service. The project expects to decrease transit trip times by up to 32 percent and increase reliability by up to 50 percent. The BRT design accommodates fare prepayment, as well as all-door and level boarding, which save time in loading and unloading passengers. Improved station areas with better lighting, shelter and real-time service information are planned to heighten the experience of taking transit. Superior service and reduced delays will maximize resource efficiency by reducing the number of vehicles needed to maintain a given bus frequency.

As the Van Ness BRT project transitions to the final design and construction phases, SFMTA will take charge of the project. SPUR is excited to mark this important milestone for the Van Ness BRT project. While the likely opening date remains a few years off, we believe that the success of this project will play a central role in demonstrating the benefits of bus rapid transit in the city and the region.