What You Need to Know About Plan Bay Area

By Egon Terplan and Ethan Lavine

SPUR has written several times about the development of Plan Bay Area since the planning process was kicked off a few years ago. Last month, the draft of the plan was finally released. What are the highlights in this 158-page plan and the accompanying 1,300-page environmental impact report? This post provides a summary of the Plan Bay Area draft and some of its key points. Keep an eye on the news feed at spur.org in the coming weeks for our official comment letter on the plan and what we think could be done to make it even stronger.

Recap: What Is Plan Bay Area, and Why Is It Important?

Plan Bay Area is a regional statement and projection about what the Bay Area could look like in 2040. Over the next 30 years, the Bay Area is projected to add 2.148 million new residents and 1.12 million new jobs. The planning questions inherent in Plan Bay Area are: Where will these new residents live? Where will they work? How will they get around? What percentage will live in apartments? What percentage will work in dense transit-oriented job centers? Accommodating this growth in a more sustainable way is at the heart of Plan Bay Area.

The emphasis on sustainability is a requirement under Senate Bill 375, California’s 2008 Climate Protection Act, which required that regions in California produce a Sustainable Communities Strategy (ours is Plan Bay Area). These strategies are intended to do the following:

1.   Identify where all of the region’s future population — at all income levels — will work and live over the next 25 years.

2.   Set forth a forecasted development pattern, know as the “preferred scenario.”

3.   Accommodate the future growth in a way that reduces per capita greenhouse gas emissions. The Bay Area is tasked with reducing per capita emissions by 7 percent in 2020 and 15 percent in 2035.

4.   Describe a transportation investment strategy and transportation network that supports the regional land use pattern and reduces per capita greenhouse gas emissions.

Plan Bay Area formally combines two existing regional planning processes, the Regional Transportation Plan and the Regional Housing Needs Allocation. The goal is to better link regional transportation planning and funding with a projection for future land use. The Regional Transportation Plan (RTP) is a multi-decade statement of the region’s likely transportation spending projects and needs, produced every four years. This year’s RTP identifies $289 billion of likely funding over the life of the plan. The Regional Housing Needs Allocation (RHNA) identifies the number of market rate and affordable housing units that each jurisdiction in the region is required to plan for over the upcoming seven years. The RHNA will be updated several times during the life of Plan Bay Area.

Plan Bay Area is the product of two regional agencies:

Plan Bay Area is important because it seeks to describe a future Bay Area where the average person produces fewer greenhouse gas emissions from driving and where we plan for enough housing for the region’s expected growth. Importantly, it must accomplish those two goals in a way that reduces per capita emissions. Managing these important goals is intended to change the way existing regional agencies go about their planning work and lead to a more holistic approach to transportation planning. Once the plan is adopted, future housing and mixed-use projects that are consistent with the adopted plan will have a more streamlined approval process under the California Environmental Quality Act.

An important caveat about the plan’s powers: Though it is regional in scope, Plan Bay Area does nothing to change local land use decisions or powers. ABAG and MTC have no direct power to decide where future development will actually occur or what natural lands will be preserved.

Plan Bay Area is perhaps misnamed since it is not a “plan” in the traditional sense of describing specific zoning changes at a neighborhood scale. Instead, the plan is more of a statement about growth that local governments can look to when making land use and development decisions. The plan has slightly more direct power to affect travel patterns because it prioritizes transportation investments such as transit projects and policy suggestions, including increased bridge tolls and a potential driving fee based on miles traveled.

What Are Highlights of the Draft Plan?

The Plan Bay Area draft includes performance targets, long-range demographic and economic forecasts, and investment strategies for everything from road maintenance to climate projection programs, such as a regional electric vehicle charger network.

What are the most significant elements of the plan? Let’s take a closer look at how the draft seeks to shape and reshape the region’s land use patterns and transportation network.

Land Use: Almost no greenfield development

A major highlight of the Plan Bay Area draft is that it accommodates virtually all new development within the existing urbanized footprint of the Bay Area. In other words, it projects a region that does not sprawl further. It assumes continued protection of agricultural lands and enforcement of existing urban growth boundaries.

Where will all of the new growth happen? The Plan Bay Area draft directs growth first and foremost to the jurisdictions that have expressed a willingness to accommodate new housing and employment centers. In recent years, some local governments have worked with MTC and ABAG to identify and establish priority development areas, or PDAs, in their jurisdictions that will accommodate infill housing development and employment centers. The plan projects that PDAs will accommodate 80 percent of housing growth and 66 percent of job growth.

Transportation: Almost all funds for maintenance, not expansion

Plan Bay Area identifies $289 billion in available funds for transportation projects over the next three decades and prioritizes how they should be spent. More than half of the total funding (53 percent) comes from local sources, like sales taxes, that are often already dedicated to specific investments. An additional 32 percent come from state and federal sources. MTC directly controls the remaining 15 percent of the funding. However, the agency also has significant influence on how the federal and state funds are directed because it serves as a gatekeeper of sorts for directing funds to regional transportation projects.

How would the draft of Plan Bay Area spend this $289 billion? By adopting a “fix it first” policy, MTC is dedicating the vast majority of funding (86 percent) to the maintenance and improvement of the region’s existing transportation system. While the Bay Area already devotes more of its funding to maintenance than other regions in California, this is an increase from about 80 percent in prior plans.

Of the $289 billion in funding, $232 billion is already committed to existing projects. This leaves $57 billion in so-called discretionary funds that can go to one of many projects based on future policy decisions and criteria. For example, the draft plan also includes $14 billion in the new One Bay Area Grant program, which will provide flexible funding for transportation infrastructure largely to support growth in the PDAs. The grants are intended to assist jurisdictions to plan for new transit-oriented housing projects, and also to invest in improvements to infrastructure necessary to support infill development, such as new bicycle lanes and more pedestrian-friendly sidewalks.

Overall, 62 percent of the plan’s funding is devoted to transit, with most of that going to maintenance and a small share for expansion. The plan identifies $114 billion for transit operations and argues that this level of investment will fully fund transit operating needs. It also identifies $30 billion for transit capital projects out of a total need of $47 billion (leaving a shortfall of $17 billion). And it includes a new $500 million “Transit Performance Initiative” whose goal is to support improvements on major transit corridors that will likely see future growth.

Some of the big transit projects in the plan include $8.3 billion for BART to San Jose, $4.2 billion for extending Caltrain to the Transbay Transit Center and $1.6 billion for Muni’s Central Subway. The plan also includes nearly $6.7 billion for expanding MTC’s express lanes (i.e., freeway carpool lanes) in more parts of the region and $1.5 billion for Valley Transit Authority express lanes in Santa Clara County. Other road projects include nearly $2.3 billion in freeway performance funds (such as metering lights) and $2 billion for the Presidio Parkway. 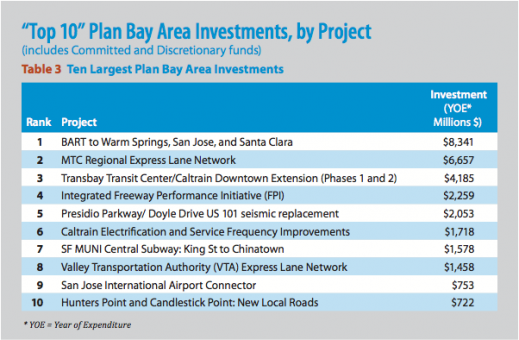 Without changes to the region’s policy structure, the plan will not likely be achieved. For example, Plan Bay Area assumes a continuation of the same level of investment that took place under California’s redevelopment program. But with redevelopment agencies shuttered last year, there is no such funding mechanism in place today.

Plan Bay Area identifies some of the initial policy projections worth considering. Many of these are ideas SPUR has advocated:

What Are the Alternatives to the Plan, and How Do They Differ?

If you’ve been following Plan Bay Area, you may have heard about the alternatives to the plan — variations on the draft version that put forward policies designed to achieve somewhat different objectives and outcomes. As part of the environmental review process for Plan Bay Area, ABAG and MTC review the environmental impact of their draft against the three alternative plans as well as a business-as-usual approach.

The Plan Bay Area draft provides a summary of the differences between the alternative plans (pg. 114):

In addition to the “preferred scenario” described in the Plan Bay Area document and a control scenario of adopting no plan at all, there are three other scenarios tested:

Some of the key policy variables tested in the different alternatives are:

On most measures examined in the EIR, the differences between the draft plan and the various alternatives are fairly slight. All four plans are projected to reduce per capita carbon dioxide emissions from cars and trucks, house the region’s projected population growth and increase the gross regional product. These often-minor differences in performance make sense, as all four plans overlap a great deal in their proposed policies for land use and transportation investments. The great challenge in weighing the merits of the draft plan against the alternatives comes in making sense of the impact of multiple, sometimes overlapping, policies aimed at achieving the same general goals.

Now that the draft is out, the public has an opportunity to provide comments in response to both the Plan Bay Area draft and the EIR. Public hearings on the draft plan are underway, with one scheduled in each of the Bay Area’s nine counties. Public comments can also be submitted by email. The comment period ends May 16, and final adoption of the plan is schedule for this summer.

SPUR will respond in detail to the Plan Bay Area draft in a comment letter to MTC and ABAG. Keep an eye on the newsfeed at spur.org for our full analysis.

Update: read our comment letter to MTC and ABAG >>