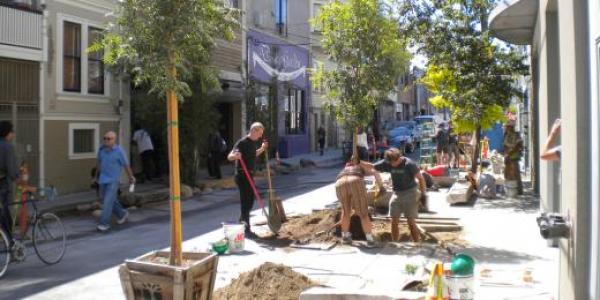 Besides making our streets prettier, what does our urban forest of street, park and backyard trees do for us? Trees are good for cities in lots of ways. They significantly increase property values. They provide shade, keeping energy demand in check on hot days and cooling the pedestrian realm. They clean the air, sequester carbon (slowly reducing global warming), provide habitat for birds, make streets more walkable and reduce urban flooding by retaining stormwater: A single tree may intercept and absorb up to 2,400 gallons a year. A recent SPUR report discussed the future climate-adaptive benefits of trees in helping to mitigate urban heat-island effect, the phenomenon where heavily urbanized areas become significantly warmer than nearby areas due to heat-retaining materials like concrete and asphalt. We recommended that cities conduct a tree-canopy census and identify opportunities for better shade-tree coverage in underserved and intensely urbanized areas. (A crowd-sourced map of such trees in San Francisco, calculating their benefits to the city, can be found — and expanded — at urbanforestmap.org. Register your own tree!)

With just 12 percent canopy coverage — the area of ground covered by trees, from a bird’s-eye view — San Francisco is one of the least tree-endowed cities in California and in the United States. San Jose maintains 15 percent canopy coverage, Los Angeles and Oakland have 21 percent coverage, and New York has 23 percent coverage, just above the national average of 22 percent. Green-minded San Franciscans would probably be surprised to learn that our city ranks 21 out of 22 major cities with regard to tree canopy.

Historically of course, San Francisco was almost completely devoid of trees — home to sand dunes and brackish marshes. As the city grew, trees were planted on streets, in backyards and in parks. Today, we have about 670,000 trees in San Francisco on public and private land, of which 109,000 are street trees in the public right of way. These trees are planted, established and maintained by both private property owners and the Department of Public Works (DPW). Generally, larger streets and streets with planted medians are maintained by DPW; others are cared for by adjacent property owners. But our numbers decline every year. Why? Because the mortality rate of urban trees is 3 to 4 percent each year. In San Francisco, this means we lose about 4,000 trees a year. Between the efforts of DPW, which plants about 400 trees a year, Friends of the Urban Forest (FUF), a nonprofit dedicated to tree-planting, which plants about 1,200 trees a year, and homeowners and commercial property owners acting on their own, at most we are planting 2,000 new trees in the city every year. This means we are not even keeping up with the death rate: Our canopy is in decline. Recent budget cuts at DPW have made matters worse. About 24,000 trees currently cared for by DPW are in the process of being relinquished to their adjacent property owners. This means that some property owners will be forced to take on both the maintenance and the liability of having a tree they didn’t plant and might not want.

This puts our urban forest at great risk.

To address this problem, FUF, the San Francisco Planning Department, and DPW recently hired AECOM to study options for a permanent source of funding for tree maintenance. (The financing study and the Planning Department’s initiation of an Urban Forest Plan were recently featured at a SPUR forum.) The study considered what policy and management changes would be needed to reverse the decline of the city’s canopy and recommended a few potential sources for financing even broader public management of street trees, such as a landscape and lighting assessment district or a parcel tax. The study found that a more comprehensive municipal program would provide net benefits to San Francisco residents and that tree-owning property owners would save money annually with a municipal program (since they wouldn’t have to pay for pruning/maintenance, sidewalk repair and legal claims associated with sidewalk falls). Today, DPW spends a significant amount of its time on one-off emergency tree-care requests. A more comprehensive municipal program would enable the city to employ best practices in tree maintenance and pruning, which would save costs by as much as 50 percent through improved efficiencies. A comprehensive municipal program could also expand the city’s urban forest by at least 50 percent, adding thousands of new trees each year.

Supervisor Scott Wiener, long a champion of the urban forest, recently held a hearing at a committee of the Board of Supervisors to begin the conversation around what could be done to sustain our street and park trees in light of the fact that they are not successfully competing for the city’s general fund dollars. I testified on behalf of SPUR that a more sustainable solution is needed, and that we hope to continue the conversation around how to maintain both our street trees and our park trees for the next generation.

Many people at the hearing — representing a broad geographic distribution around the city — mentioned that trees were important to their neighborhood and that they would be willing to tax themselves to pay for trees, as they are a benefit that everyone shares in, not just property owners. Several people urged that we plant lowest-canopied areas first, if we can ramp up planting. One of the most memorable lines was, “Trees are the only urban infrastructure that grows in value over time.”

In 2013, we look forward to participating in more conversations and hearings and advocating to change the trajectory on maintenance to ultimately expand San Francisco’s urban forest in the future.