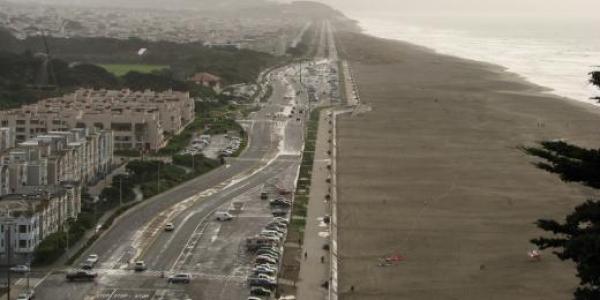 Some important improvements that SPUR recommended in the Ocean Beach Master Plan will happen right away, thanks to quick work by the San Francisco Department of Public Works (DPW) and the Recreation and Park Commission. This winter DPW will construct a planted median in the center of the Great Highway from Lincoln Way to Balboa Street as part of a previously scheduled project to repave the roadway. DPW acting director Mohammed Nuru, who sits on the Ocean Beach Master Plan Steering Committee, noticed that the long-range vision for Ocean Beach included street medians among its many suggested improvements. Rather than delay the repaving project while the long-term roadway proposals are analyzed, Nuru suggested that a median could be integrated into the current effort, provided it didn't change the configuration of the road, which would trigger a complex review process.

The project will install landscaped medians where today they exist only in paint. It will improve pedestrian safety and access to the beach by providing shorter crossings and pedestrian refuges, as well as clarifying rights of way on large swaths of currently unmarked pavement. It will also improve the aesthetics of the highway, as well as its environmental performance, by providing much-needed greenery and increasing permeable surfaces for stormwater infiltration in what is now a large, undifferentiated slab of asphalt. A selection of rugged native plants suitable for the beachfront’s challenging climate is under development.

The only concern that emerged about the project was ensuring that the Great Highway could continue to accommodate major events such as the Nike Marathon and Bay to Breakers races. A review of the proposal with Recreation and Parks Department event managers allayed those fears. The project went before the Recreation and Parks Commission Capital Committee in early June and the full Commission on June 21. Installation is set to begin as part of the larger repaving project this winter.

Read the staff report on the project >>