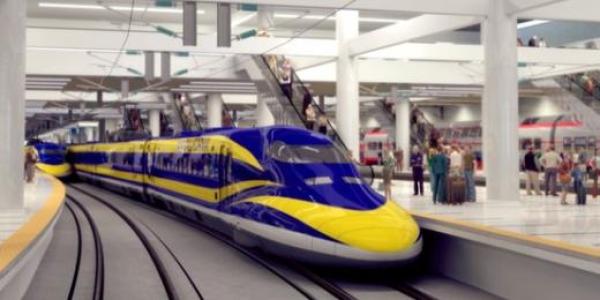 Earlier this spring, high-speed rail in California took two very significant steps. First Bay Area leaders announced a plan to electrify Caltrain, which would make it possible for Caltrain and high-speed rail to share the same tracks between San Jose and San Francisco. Second the California High-Speed Rail Authority released an updated business plan that cuts the cost of the train system by a third.

The new business plan (download the official summary here) still assumes an electrified train system that will travel between San Francisco and Los Angeles in 2 hours and 40 minutes (at 220 m.p.h.) and will operate without any ongoing subsidy.

There are four key changes in this updated business plan:

1. It lowers the cost of the high-speed rail system by $30 billion to $68.4 billion by adopting a “blended” approach. This focuses investment on upgrading existing regional and commuter rail systems, not building an entirely new statewide system. The blended approach is realistic and allows for the system to be built incrementally. In the 2011 business plan, the blended approach was estimated to cost $78 billion. It is now estimated to be $68.4 billion. The savings are primarily due to updated assumptions about inflation and faster construction time. This approach has greater political support in adjacent communities (namely on the Peninsula) and has successful precedents around the world, including France’s popular TGV.

2. While starting construction in the Central Valley, it includes early investments in the Bay Area and Los Angeles (the “bookends” of the system). This includes the decision to help fund the electrification of Caltrain with a $700 million statewide investment in addition to $800 million in local and regional funds to help electrify Caltrain by 2020. Electrifying Caltrain will speed service (since electric trains can stop and start faster than diesel ones) and will reduce emissions by 90 percent. The new business plan also includes investment in upgrading the rail systems in the Los Angeles area. Overall, $3.5 billion will go into the urban systems over the next eight years. 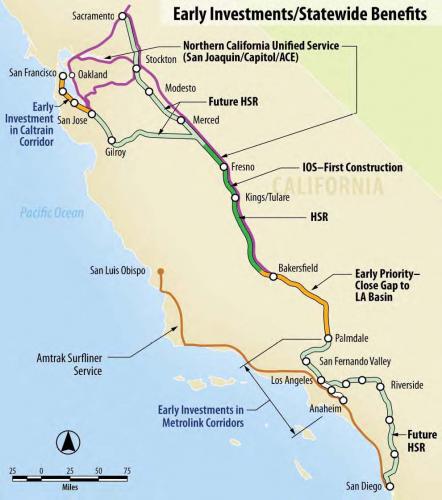 3. It proposes that the initial operating segment will connect from the Central Valley to Southern California.The 2011 business plan proposed that the initial construction section would run from Madera (south of Merced) to Bakersfield. This business plan assumes that the system will begin with passenger service from Merced to a station in the San Fernando Valley. To connect from the Central Valley to Southern California requires investment in building passenger rail tracks over the Tehachapi Mountains to connect Bakersfield and Palmdale. This business plan assumes that this segment will have sufficient ridership and revenue to exceed its cost and will be self-sustaining without need for operating subsidy.

4. It makes high-speed trains part of an integrated statewide transportation system in California, where each investment has immediate benefits to its respective region. While the initial construction and operating segments will be to the south, the California High-Speed Rail Authority is proposing improvements to the existing regional rail system between the Central Valley and the Bay Area, namely the Altamont Commuter Express from Stockton to San Jose and Amtrak’s San Joaquin line from the East Bay to Stockton or Sacramento via Contra Costa County.

While we commend Bay Area leaders and the California High-Speed Rail Authority for taking these important steps to move the project forward, SPUR remains concerned that high-speed rail’s initial operating segment runs from the Central Valley to Southern California and will not connect to the Bay Area. We are also concerned that there is not yet funding to extend Caltrain’s service from the current San Francisco station at 4th and King to the new Transbay Transit Center in downtown. This raises a few questions:

· When will be there be a one-seat ride from San Francisco to Los Angeles?

· If there is funding to upgrade the Altamont Commuter Express over the Altamont Pass, does this mean a rider from San Francisco would take Caltrain to San Jose and then ACE to Stockton before connecting to the trunk line to Los Angeles?

· Does this mean that we should rethink Dumbarton Rail as an electrified service that could bring upgrades and electrified ACE trains to meet up with Caltrain on the Peninsula?

· What will it take to fully fund high-speed service over the Pacheco Pass south of San Jose?

The new plan puts the onus on the Bay Area as a region — and SPUR as a civic voice — to find the money to both bring Caltrain and high-speed service to San Francisco’s key transit hub and connect that service to the initial high-speed operating segment in the Central Valley.

Despite our concerns about the initial focus on the connection to Southern California, we at SPUR (like the mayors of California’s major cities) remain strong supporters of high-speed rail. The blended approach takes a pragmatic tack — without sacrificing true high-speed service.