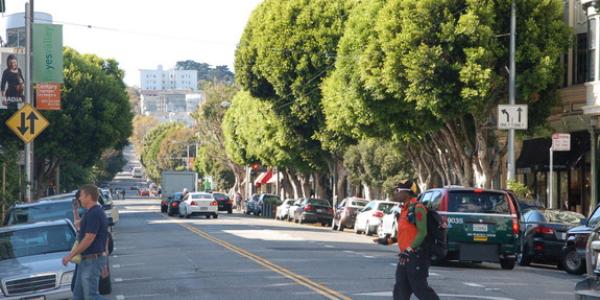 Last month, the San Francisco Municipal Transportation Agency (SFMTA) converted a one-way commercial stretch of eastern Hayes Street to a calmer two-way traffic configuration. It’s just one project in a larger move toward making streets less focused on whisking cars through town and returning them to places for walking, bicycling, efficient transit and civic life. In August, the SFMTA also converted McAllister Street for two-way traffic, and it is developing similar plans for the east end of Haight Street and several streets in the Tenderloin and SoMa districts.

The paradigm of multi-lane, one-way streets dominated urban transportation planning in the United States after World War II, resulting in the widespread conversion of downtown streets into one-way thoroughfares. The sounds, smells and sense of danger from fast-moving car traffic have driven pedestrians, and businesses, of off these routes, transit lines have been forced onto longer routes and bicycling has become too perilous for most people.

But that’s all changing in San Francisco. In the SFMTA’s latest project, two-blocks of Hayes Street (from Gough to Van Ness) were reconfigured for two-way traffic, as called for in the Market-Octavia Plan to suit “the street’s commercial nature and role as the heart of Hayes Valley.” The street’s previous one-way configuration had been implemented in the mid-1950s to give priority to motor vehicles passing through from Ninth Street to the one-way Fell and Oak streets. The new traffic pattern should increase local activity and make this stretch of Hayes a calmer, more inviting environment.

Two-way Hayes is also a step towards a more efficient route for eastbound 21-Hayes Muni buses heading into downtown, which previously made three extra turns and several additional stops in order to navigate around the street’s westbound-only section. (The bus turns left at Laguna Street, right on Grove Street, and right again at Polk Street before making a sharp left onto Market Street). If two-way traffic is eventually extended all the way to Market Street and overhead trolley wires are moved, buses could have a more direct route.

Other two-way configurations have proven to be wholly positive for transit and other alternative modes. On McAllister, Muni’s 5-Fulton line is already zooming through its new two-way configuration, which restored eastbound access for buses, bicycles and taxis along its east end, saving an average of 3 minutes per trip and $200,000 per year in operating costs on the line.

In 2014, the two-way Haight Street project will bring the city’s first painted bus-only lanes, and plans are also being developed for a two-way Folsom Street in the SoMa district. By the end of this year, the SFMTA says it will two-way portions of Eddy and Ellis streets, as called for along with Leavenworth and Jones in the Tenderloin/Little Saigon Transportation Study.