How Will 1.7 Million More People Cross the SF Bay? 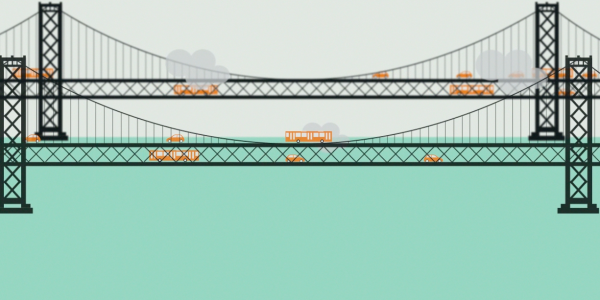 The San Francisco Bay Area is expected to grow by 1.7 million people in the next 25 years. If you’ve ever muscled your way onto an overcrowded BART train or idled at the toll plaza waiting to cross the Bay Bridge, you may wonder how we’re going to get all these additional people back and forth across the bay.

Meanwhile, gas is just under $4 per gallon today. What happens when it hits $6 or $8 per gallon? Will we have enough transit capacity to manage everyone who can no longer afford to drive?

In the last century, visionary planners made major investments linking San Francisco and the East Bay. When the 20th century dawned, the only way to get from San Francisco to Oakland was by ferry. We built the Bay Bridge during the Great Depression and the BART tunnel in the early 1970s. It’s been nearly 40 years since then, and the Bay Area has grown by 2.7 million people. Yet we’ve added no new capacity. Even the new Bay Bridge, currently under construction, won’t help: It will be much more resilient to earthquakes, yet no bigger than the bridge it replaces.

What will our generation’s contribution be?

And how will these 1.7 million additional people travel across the bay?

For our region to thrive as it grows, travel must move away from personal automobiles and shift to higher capacity public transit options. SPUR has developed an animated film to illustrate a few simple things we can do today, as well as one big idea for the future:

Crossing the Bay from SPUR on Vimeo.