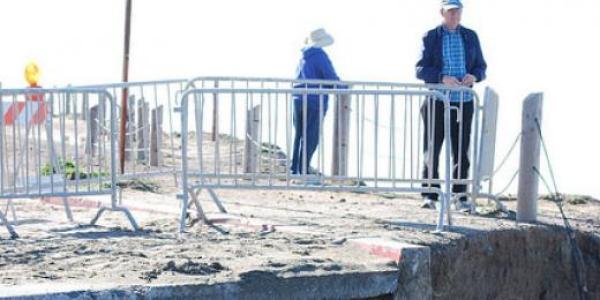 On July 13, the California Coastal Commission unanimously denied a permit application from the City and County of San Francisco for coastal armoring along the Great Highway South of Sloat Boulevard. The application was submitted by the City's Department of Public Works, which is responsible for the protection of city infrastructure, including the Lake Merced Tunnel, a 14-foot diameter sewer pipe under the Great Highway. DPW constructed rock revetments (i.e., linear piles of boulders) on the beach in 1997 and 2010 in response to erosion caused by severe winter storms. The permit would have 1.) retroactively approved the un-permitted 1997 revetment, 2.) made permanent the temporary emergency permit for the 2010 revetment, and 3.) added new armoring, extending revetments and adding tangent pile walls (made from reinforced concrete piles) behind the bluffs.

The surprise ruling, against the recommendation of commission staff, is a significant victory for surfers and environmentalists, who oppose coastal armoring for its impacts on the beach, including the loss of sand and impeded coastal access. After presentations from the DPW staff and project opponents, the commission protested the ad-hoc nature of the city's coastal management and insisted that they would not approve additional armoring until a long-range plan was in place. Members were explicit that they intended to send a message to city officials. The commission did not take up the substance of the city's application, which included an analysis of future risk in three locations, including one where there is an immediate risk of damage.

As the project leader of SPUR's work on Ocean Beach, I provided testimony on the status of the Ocean Beach Master Plan, due out in January. The ruling has significant implications for the plan, which is intended to provide the long-range framework the commission is demanding. By precluding further short-term armoring, the commission has increased pressure on the project to provide an answer, and on the participating agencies to quickly adopt its recommendations. But the short-term picture is left unresolved. The Master Plan is a non-regulatory package of recommendations, which will guide a host of federal, state, and local agencies, each with its own internal planning processes. The recommendations must be translated into distinct and fundable projects and subjected to review under state and federal environmental regulations CEQA, NEPA and the California Coastal Act. All of this will take several years, during which additional storms are likely to occur. Although they did send a clear message in favor of long-range planning, chances are that the commissioners will find themselves facing an emergency armoring permit before they see a long term fix come to fruition.

Read our Urbanist issue on the future of Ocean Beach >>

Read the latest on the Ocean Beach Master Plan >>