The recent renovation of the Oakland Museum of California (OMCA) by Mark Cavagnero Associates has brought much-deserved attention to this important Modernist design. Our Young Urbanist tour of the museum on Friday, June 3, A Night at the Oakland Museum of California, will give a behind-the-scenes look at the renovation project. But the original design of this Modern masterpiece deserves a closer look.

Designed in 1963 by architect Kevin Roche and landscape architect Dan Kiley, the museum was celebrated as a milestone in museum design when it was completed in 1969. Roche and Kiley worked with local landscape designer and horticulturist Geraldine Knight Scott to create an institutional complex that integrated architecture, landscape and program. The museum design has since proven to be a significant example of midcentury Modernism in the United States and is unique for its dual role as a museum and an urban park. Roche designed the museum with three distinct areas for art, history and natural science, and Kiley and Scott created a roof-top urban garden above that serves as an important public space within Oakland. 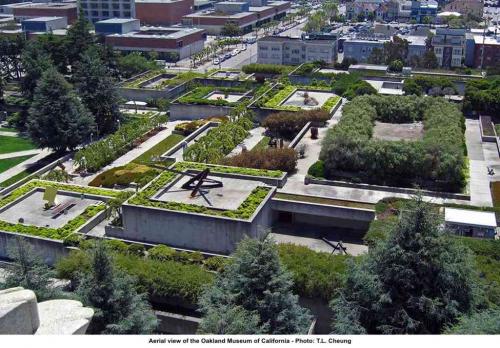 The OMCA design epitomizes themes of the Bay Area’s modern design aesthetic—with monumental, low slung, horizontal planes rendered in stark concrete. The lush landscape softens the lines of the building and provides the essential connections between indoor and outdoor spaces. The combination of architecture and landscape creates a thoughtful procession throughout the museum complex and facilitates the explorative experience so critical to museum programming.

The OMCA project was one of several important collaborations between Roche and Kiley, including the Ford Foundation in New York City and the Miller Garden in Columbus, Indiana (considered to be Kiley’s residential masterpiece). The lesson in the design of OMCA is in the harmonious skills of the design team, combining Scott’s knowledge of local plants, with Kiley’s powerful vision for an urban park and Roche’s grand gesture in modern institutional design. Together, these designers created a multi-faceted yet unified space for learning and exploration. The act of renovating and upgrading the museum by Mark Cavagnero Associates provides new focus on the OMCA while adding another rich layer to this important Oakland landmark. 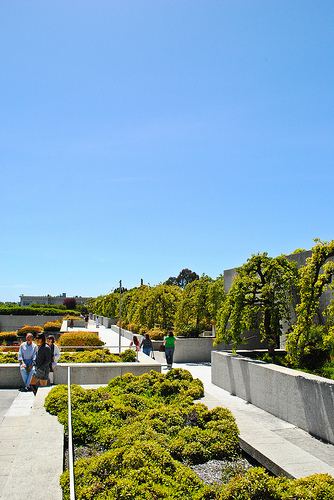