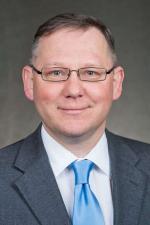 Prior to joining SPUR, Michael served as deputy director for SV@Home, where he led the Measure E Affordable Housing campaign, which was approved by San José voters in March 2020.

Previously, Michael served as policy director for the Non-Profit Housing Association of Northern California (NPH), formulating and executing local, regional, state and federal policy and funding initiatives. Michael has been instrumental over the years in ensuring many wins for affordable housing, including the 2017 passage of a 15-bill state housing package, the Palmer Fix bill that reaffirmed local authority to administer inclusionary housing requirements, and legislation to strengthen the public surplus land law.

Michael got his start working for the Sisters of Mercy of the Americas, igniting his passion for affordable housing and leading him to Self-Help Enterprises (SHE) for 10 years. SHE, located in Visalia, is the oldest and largest nonprofit developer of mutual self-help housing in the nation. Michael graduated from San Francisco State University with a Bachelor’s degree in philosophy and religion, speaks fluent Spanish, and is a former City Council member for the City of Visalia. He has served on numerous boards and commissions, including Housing California and the Housing Leadership Council of San Mateo County.