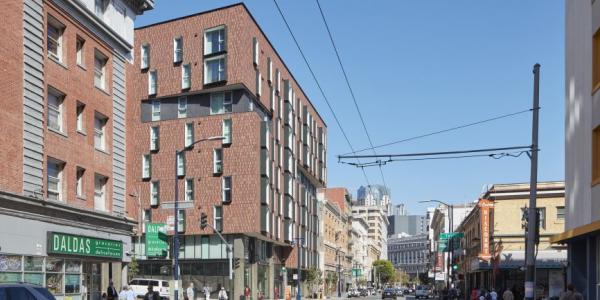 Note: This article was updated on September 26, 2022, to add the official letter names of these propositions.

This November, San Francisco voters will be asked to choose between two competing charter amendments to streamline the creation of new affordable and workforce housing: Prop. D and Prop. E. On the face of it, the two ballot measures appear very similar. But the policy details included in these measures make a significant difference in the impact each would have on affordable housing production in San Francisco.

Supervisor Connie Chan introduced a competing charter amendment, Prop. E, the Affordable Housing Production Act. Although Prop. E would also remove some red tape for the approvals of selected types of housing development, it does not fully streamline 100% affordable housing projects, it places additional requirements on mixed-income projects and it has more restrictive labor standards than Affordable Homes Now. Prop. E has been co-sponsored by Supervisors Peskin, Walton, Mar, Ronen, Preston and Safai.

Here’s a summary of the key differences between Prop. D and Prop. E:

Under Prop. D, permitting and funding for projects where 100% of the units are affordable to low- and middle-income households would no longer be discretionary. This means proposed projects that conform to existing zoning rules would not be required to undergo additional environmental review under the California Environmental Quality Act (CEQA), and they would be protected from lawsuits under the same law. Prop. E does not remove funding decisions from discretionary review, which means that 100% affordable housing projects seeking city funds would be subject to CEQA review and vulnerable to potential lawsuits. It’s important to note that while CEQA was originally intended to protect the environment from the negative impacts of sprawl, NIMBY groups often use this law to block much-needed housing development in cities. Prop. E would do nothing to stop this abuse of CEQA.

The two charter amendments also differ on what levels of affordability they target. Under existing state law SB 35, low-income housing projects that serve households with incomes below 80% of the area median income (AMI) are already fully streamlined and exempt from CEQA. Prop. D would expand the streamlining to include moderate and middle-income households. A 100% affordable project that provides an average affordability level of 120% of the Area Median Income (AMI) would be eligible for streamlining, compared to 80% AMI Income under state law. Under Prop. D, this would allow 100% affordable housing projects to also include some middle-income units for households making up to 140% of AMI. To ensure that the prices and rents are not set higher than the neighborhood average, the homes would have to be priced 20% below the average for the neighborhood.

Figure 1. What Does AMI Mean? Examples of Affordable Housing Levels in 2020

Encouraging more moderate and middle-income housing is consistent with the city’s existing policy commitment under 2019’s Prop E, which made it easier to build housing for educators earning up to 140% of AMI. Recognizing the need for more affordable housing opportunities for moderate and middle-class families who don’t qualify for existing programs and subsidies, many community groups have sought city support for developing these types of units. For example, MEDA has proposed a new condominium project at 2205 Mission Street that would provide new condominiums affordable to households with incomes between 80% and 130% of AMI.

Prop. D requires that streamlined mixed-income projects provide 15% more affordable units than currently required by the city’s existing inclusionary policy. Today, 22% of units in new rental housing projects must be affordable to low- and moderate-income households. Under Prop. D, a 100-unit rental project would require a total of 25 units (22 units + 3 additional units [15% of 22] = 25 units). The additional affordable units would have the same maximum sales prices and rent tiers as those established in the city’s inclusionary policy.

3. Prop. D does more to deepen the bench of construction workers in the Bay Area.

One serious roadblock to building enough affordable housing is that the median time frame for the approval and permitting process is 27 months in San Francisco, far longer than any other city in California. Prop. D would expedite approval of eligible projects by mandating clear and limited time periods for the city to determine an application’s completeness and eligibility for streamlining, and by restricting the city’s ability to delay or reject permits for an eligible housing project that complies with the planning and building codes. The planning department would have to approve projects of more than 150 units within 180 days of an application submission. Projects of 150 or fewer units would be approved within 90 days of submission. Other construction permits for things like grading, streets and sewer/water connections would also be accelerated under Prop. D. City departments would be required to use objective standards to determine whether a project complies with existing city code before issuing permits.

Prop. E does not provide any time frames for deeming that an application is completed and eligible for streamlining. This means that many projects could continue to experience significant permitting delays if projects are deemed incomplete, and there would be no recourse.

On the face of it, the two charter amendments to streamline housing may look quite similar to voters. But a deeper look at the details of these measures shows that Prop. D is much more likely to result in more affordable housing production than Prop. E.

Prop. E does not fully streamline 100% affordable housing and leaves projects vulnerable to unnecessary environmental reviews and NIMBY lawsuits. Prop. E also places onerous new labor standards and inclusionary requirements on mixed-income projects that will only make it harder to build affordable housing. It provides no deadlines on the approvals process, leaving the door open to more delays and politicization.

Prop. D the SPUR-sponsored measure, fully streamlines affordable housing projects for low-income households. It facilitates the construction of moderate- and middle-income housing for teachers and other working families. It requires projects to be approved within three to six months, and provides prevailing wages and health benefits for all construction workers. Of the two proposals, Prop. D will be more likely to put a dent in San Francisco’s housing shortage by both speeding up the project approval process and addressing the shortage of skilled construction tradespeople.