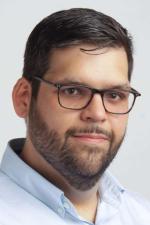 Jacob Denney is SPUR’s economic justice policy director, leading our work to address the region’s economic inequity and develop an agenda for shared prosperity. Growing up in a working-class Puerto Rican family, Jacob learned early on the importance of creating effective government policy to help build economic security for all people. He previously worked as the director of policy and research at the Insight Center, a national economic and racial justice organization, where he led work on confronting barriers to economic stability for Black people, immigrants, and women across Mississippi.

Formerly, Jacob worked on criminal justice reform research and advocacy at the Pew Charitable Trusts. Jacob also co-founded the Economic Justice Project at the Southern Poverty Law Center, a project aimed at helping people who have been harmed because of their economic status. He began his career working in the Massachusetts State Senate. Jacob received his Master of Public Policy from the Price School of Public Policy at the University of Southern California and his B.A. in political philosophy from UMass Boston.